Genomic testing has been evolving quickly over the past two decades. It has become increasingly less expensive and more informative to genotype animals.

Genomic, test results are used to enhance predictability of current selection tools, to achieve more accuracy on EPDs for younger animals, and to characterize genetics for traits that are difficult or expensive to measure, such as feed efficiency, carcass traits in breeding stock or maternal traits in bulls. With the investment in genomic technology, animals who were previously placed into single animal contemporary groups now benefit by receivingGEPDs, rather than interim EPDs .

Genomic testing is one more tool for breeders to use to more accurately predict the future performance of animals as parents in the population, but this is not a replacement to performance data recording. Breeders sometimes ask if it is no longer necessary to collect weights and measures (e.g. weaning weights, ultrasound scan data, or carcass data, and heifer breeding records). On the contrary, phenotypic measures continue to be an important part in further development of improved genomic panels and the refinement of this technology over time. Genomically enhanced EPDs (GEPDs) are important because they utilize genomic test results in addition to pedigree, performance and progeny data for increased reliability of an animal’s EPD.

Angus GS stands for Angus Genomic Selection. This name reflects the aim of the test to give Angus breeders and their customers a tool designed to guide whole-herd selection, mating management and breed-improvement decisions, as well as denoting the value of seedstock cattle. Ordering the Angus GS test is exactly the same process as ordering any other DNA test.

Singlestep methodology for our genetic evaluations allow us to us genomic information to strengthen the pedigree matrix in the evaluations. Based on traditional pedigree information a set of full sibs would be related by 50% and the relationship between a grandparent animal and its grandprogeny would be 25%. However, we know that some full sibs are more similar to eachother, and some are not. Genomic technology allows us to accurately describe the degree of relatedness between animals that are genotyped. Thus, strengthening our genetic evaluations, and making them more accurate than ever before. 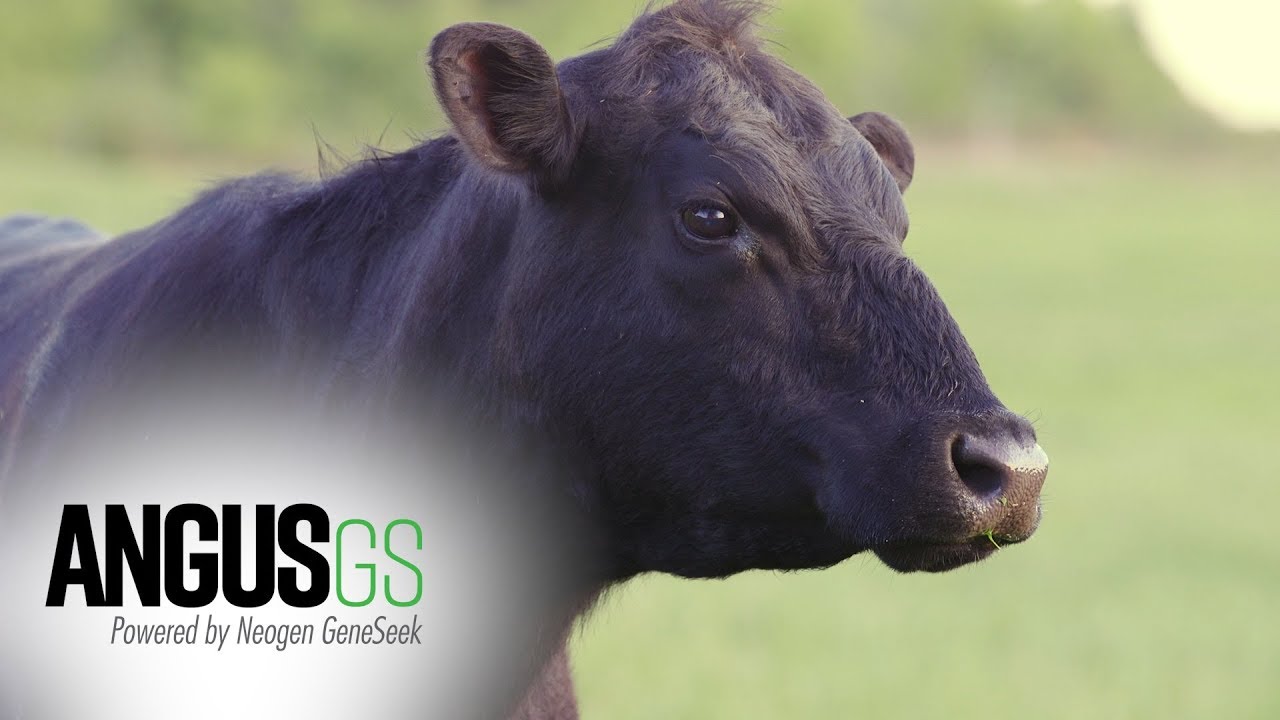 Expected progeny differences (EPDs) are genetic selection tools that provide producers a measure of an animal’s genetic merit for traits that are economically relevant to their operation. Basically, EPDs are a measure of how an animal’s progeny can be expected to perform, on average.

An animal’s genetics will contribute in part to how it performs. A portion of that performance is also dictated by the environment provided to that animal. The environment includes weather, disease, feed, stress, handling, vaccination protocols, maternal environment, housing, and the animal group dynamics. The environment differs for each herd as geography and producer management plays a large role in environment. EPDs remove the environment from all traits measured and provide producers with an estimate of the genetics that contribute towards each trait.

How are EPDs calculated?

The Canadian Angus Performance Program is based on whole herd reporting. Participants on the program are required to report complete cow herd inventory information (a calf or a fate or cull code for each cow in your inventory), and a birth weight and weaning weight on every calf. Complete contemporary group information is vital for the calculation of accurate EPDs. In addition, accurate management group recording is vital for the calculation of accurate EPDs. Members should place all calves that were managed the same way, and given the same opportunity to develop the trait being reported in one management group. Any calves treated differently, for example, any calves fed extra or calves that were sick should be placed in separate management groups.

Why is epd accuracy important?

EPDs should always be published with an estimate of accuracy. This informs producers of the amount of information available with which to calculate the EPD. P or P+ EPDs or estimates are low in accuracy. As more information becomes available, EPD accuracy will grow from 0 to 100%.

EPDs are comparative numbers. This means that the easiest way to use EPDs is to compare a bull’s EPDs to another bull’s EPDs. For example:

What is Angus GS?

Angus GS is a newer version of the Bovine 50K panel that we used to use. It’s specifically designed for Angus genetics. It has all the same SNP markers that the 50K panel has on it, and more. There is a lot of value on genomic technology, specifically the Angus GS test.

What role does genomics, and the Angus GS panel play?

Genomic technology has been used to make EPDs more accurate. The genomic data increases the accuracy with which we relate animals to each other, verifying pedigree information, and allowing us to apply phenotypes of related animals to non-phenotyped animals.

Genotyping animals has led to more accurate EPDs for younger animals. Below are the progeny equivalents that come from the Angus GS panel. This means that doing the Angus GS test on an animal gives you as much information as having 23 calves with birth weights recorded and as many as 12 calves tested for individual feed intake.

EPDs: are a universal way of describing the genetic potential of progeny from breeding stock

EPDs: are a genetic selection tool that can help producers reach a breeding selection goal for their her

EPDs: can help you maintain the traits that you want to keep in your herd

EPDs: can help you avoid traits that you might not wish to use on your cow herd and introduce into your herd

EPDs: are a great way to describe the high quality Canadian Angus genetics that you raise to your customers

EPDs: are the only fair way to compare breeding stock across herds and different environments

The American Angus Association and the Canadian Angus Association use a custom made SNP (single nucleotide polymorphisms) genomic panel called Angus GS. This is a high density 80,000 (80K) SNP marker panel. The results from this genomic test (an animal's genotype) is incorporated into our monthly genetic evaluations to enable us to generate more accurate EPDs, as well as EPDs for animals that might not yet have been phenotyped for a specific trait.

Genomic Percentile ranks (1-100) are also provided to members to assist in establishing direction of interest for each trait. The Angus GS test results are also incorporated into our evaluation using singlestep methodology to calculate GEPDs. Incorporating genomic results in this way helps to better define the genetic relationship among animals.

If you are making selection decisions for traits that have a GEPD provided by the Association, then the GEPDs should be considered the selection tool of choice.

Genomic-enhanced EPDs are the best estimate of an animal’s genetic value as a parent combining all available sources of information.

Genomics permit higher prediction accuracies for younger animals and characterizes genetics for traits where it’s difficult to measure the phenotype.

EPD provides the most accurate and up-to-date information as it is updated every week; whereas, genomic percent ranks only update once a year and are a by-product of the system.

0
Scroll To Top
Change Location
To find awesome listings near you!