Purebred Breeder of the Year

Nominations for Manitoba Purebred Breeder of the Year are accepted during the Annual General Meeting each year and are voted on by the membership at the meeting. The winner is presented with their award at an event of their choice and they are featured in an issue of The Outlook newsletter.

Purebred Breeder of the Year – The VanDaele Award

Nominations will be received by mail or email by December 3, 2022 and from the floor at the AGM on a date that is TBD. Nominations will then be posted, and a vote taken to determine the winner. Some general guidelines to keep in mind during the nominations and voting. The recipient should be a person or persons who:

These are guidelines and if a member does not meet all of the criteria but you feel they should be considered for this award, please submit your nomination. Many people contribute to the promotion of the Purebred Angus herd in various ways, so please give this some careful thought. Also please give consideration to small and large operations both new and established.

Please send in your nominations via email or by mail to Box 172 Pierson, R0M 1S0 by December 3 or bring them to the meeting. 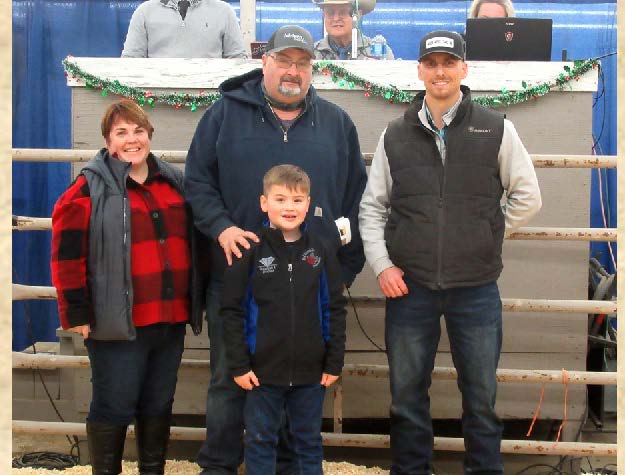 2021 Purebred Breeder of the Year: Fraser Farms - The Fraser Family

We would like to begin by thanking all involved in nominating us and, in turn, for selecting our operation to receive this award. It is always humbling to be acknowledged for doing something that you love doing. Cattle have always been a part of our family and we find it exciting to watch our son Jack, the 5th generation at Fraser Farms, beginning to become just as interested in this life.

Fraser Farms formally entered into the Red Angus breed in the Spring of 1985 with the purchase of Red Squirrel Top Value through the Red Power Test Sale. At that time, the sale was held in Brandon and if I remember correctly, during the Winter Fair. He was selected to use on commercial Charolais and Simmental replacement heifers. In the fall of 1985 three bred heifers were selected from Charlie and Ruby Simpson’s Tag-A-Long herd at Brookdale. Those heifers were predominantly used to produce bulls to use on our own herd and start our small herd of registered stock.

In 1994, I returned to the farm after completing 2 years of Agriculture Technology in Lethbridge, Alberta. We then pur-chased a small group of cows from the Cutarm dispersal as well as a few females from some other select consignment sales. We were involved in the Southwest Bull Development Centre from the early years as well as a few years in the Red Power Sale Group. These days, we market our bulls through the Cow Boys Bull Sale held in Melita at Taylor Auctions towards the end of March.

We have been supporters and consignors of several fall female sales over the years such as: The Manitoba Magic, Keystone Klassic, Touch of Class and Canadian Red Roundup sales. Anyone that was involved in those years of the Manitoba Magic can attest to how it was such a great time for everyone even though those years were plenty cold at the auction mart in December!

Currently, Jeff, Nancy and Jack Fraser of Fraser Farms maintain a herd of around 150 registered Red and Red Carrier females with another 250 commercial cows owned with Jeff’s parents and his brother Rob and family. Our registered herd focuses primarily on strong maternal genetics to produce the best mother cows possible. We believe that the Angus breed was built around maternal qualities and feel that those are the qualities that need to be carried forward. We want females that raise large vigorous calves on their own, or with very little assistance. It is our aim to produce some strong footed, great uddered cows that start a calf off without any help. We feel these are the profitable kind of cattle to build a herd on. Our commercial cows will calve starting in April and we need those calves to get up and go all on their own or with very little assistance.

We select our herdsires from many seedstock producers and are constantly looking for the next great one with a different twist on paper without sacrificing phenotype. We have used several black hided bulls over the years such as EXT, Final Answer, Rito 2100, Vision Unanimous, Eliminator and Resource with great success to get the next great red one. This year we are eagerly anticipating the arrival of the first red offspring from our Bar S Range Boss son purchased from Kenray and Merit!

Thank you again for this recognition and award. It is truly an honor. We wish everyone a prosperous year with higher livestock prices and an abundance of grass. We have been saying next year will be better for far too long, hopefully this is the year for everyone!

Congratulations! Being named the 2021 Breeder of the Year is a reward well deserved.

Commercial Producer of the Year

Nominations for the Commercial Producer of the Year are accepted from the membership each year and are decided on by the board. The winner is presented with their award at the Annual General Meeting or a mutually agreed upon event as well as announced on our social media channels, website and featured in an issue of The Outlook.

Commercial Producer of the Year

Attention Purebred Angus Breeders! Think about your Commercial Cattlemen who have a strong Angus influence in their herd.

There are many commercial cattlemen across Manitoba who have used Angus bulls or have had a mainly Angus cow herd for years with great dedication. The MB Angus Association would like to recognize more of these cattlemen. Please take the time to think about this and send in your nomination for the commercial producer who uses Angus Bulls. Nominations will be received by mail or email (the deadline is November 30, 2022) and selection will be made by the board. The recipient will be notified of the award and invited to attend the AGM, where a presentation will be made. This is a chance to recognize a dedicated producer. Please provide a brief history on the individual with the nomination.

Please send in your nominations to MB Angus Association via email or by mail to Box 172 Pierson, R0M 1S0 by November 30.

Some of Jack's cattle

Jack's herd originated from four purebred Hereford cows purchased by his grandfather in 1933 and 1934. His parents and then later he and his family expanded the herd to where in the 1980s and 90s they were running 200 registered Herford cows. Jack started crossing with Angus around 1955 first with Red Angus and then Black Angus which came from Brent Stewart.

Over the last ten years he has used some Black Angus/Black Simmental bulls. Calving about 220 crossbred cows with a herd bull battery of 1/3 Hereford, 1/3 Angus and 1/3 Black Angus/Simmental hybrids. Jack's calves are about 2/3 black with lots of of baldies and blazes. He markets them through Ashern Auction Mart and some bred heifers for sale every fall.

Congratulations to the Jack Cruise on being named Commercial Producer of the Year!

The Honourary President is elected by the membership during the Annual General Meeting. The title of Honourary President is given for recognition without the usual requirements, duties, and privileges that formally go along with the role of the president. A pin is presented to the recipient at the Canadian Angus Association Annual General Meeting or at a venue of their choice. They are recognized in the The Outlook as well as the CAA Annual Report. 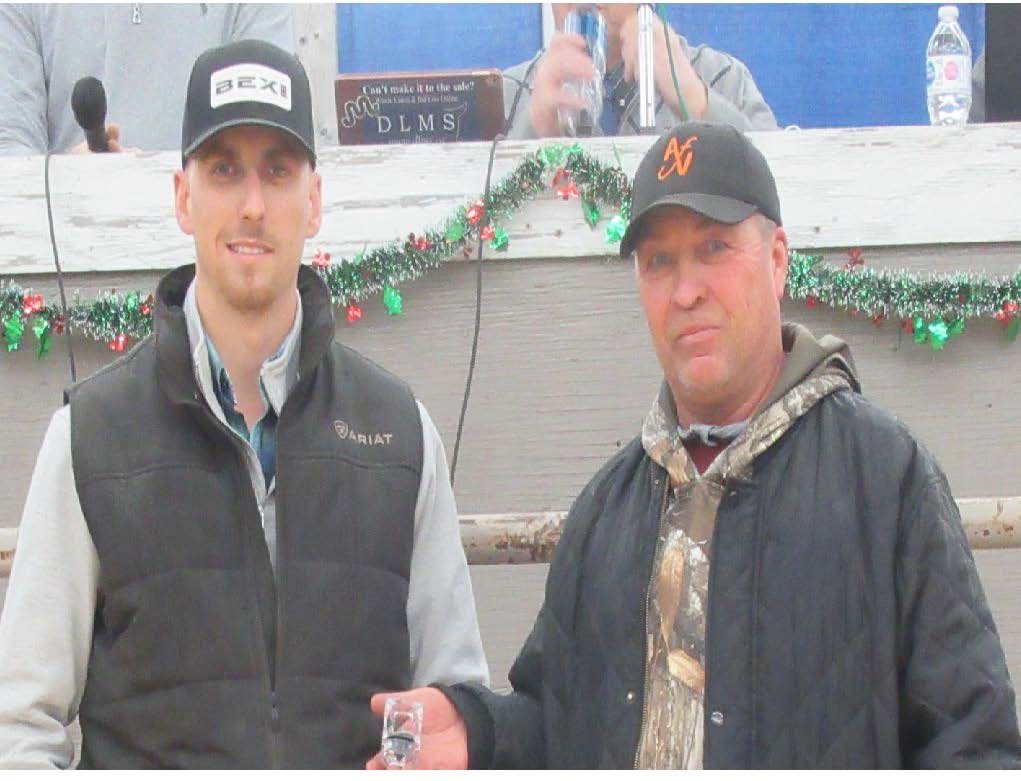 Howard McRae served as President of the Manitoba Angus Association in 1957 and as vice president in 1956. He also founded the South Brandon 4-H Beef Club in 1952, an organization that was active for 60 years.

In the summer of 1957, the McRae family hosted the Manitoba Angus Association Tour, a very successful event attended by 650 people from across the province. The McRae family organized workshops and demonstrations for all those in attendance and provided a barbecue beef supper.

Howard was a tireless supporter and promoter of the Angus breed and showed steers and breeding cattle across Canada. He had an idea to select Angus show cattle from breeders and take a show string on the western show run to Calgary, Edmonton, Saskatoon and Regina. What a great undertaking for Howard to organize these events and a great promotion for the Manitoba Angus breeders.

Unfortunately Howard and two of his sons were killed in a car accident in 1970. Two sons, Doug and Bruce, survived. After man years, Howard’s youngest son Bruce has restarted the Angus Valley herd name with a small herd of Angus in the Manitou area.

Howard McRae was a well-respected leader and loved Angus cattle.

Congratulations to Howard McRae on being named Honourary President!