No workers, no farm planning

This fall, Darren Ippolito took a moment to do some math.

The rancher, who has a cow-calf operation and runs Moose Creek Red Angus in Kisbey, Sask., looked at his records to see how many employees he’s had on the farm and where they were from.

“I was counting up the other day. We have hired people from 15 different countries,” said Ippolito, who manages the farm with his parents, Glenn and Donna. “(We hired) First Nations, LBGQT, visible minorities… we’ve employed them (all) over the years.”

Those people have served in a number of roles. Some have been full-time, others seasonal and others were contract workers for things like building a fence or putting up silage.

“We have different layers of paid and unpaid family, and staffing,” he explained, including retired farmers and guys on a break from their main job in the oil patch.

As of November, Ippolito had an employee from Scotland and was hoping to hire two more people for the ranch. One person quit in May because he missed his job as a long-haul trucker. Another decided to leave in the fall so he could be closer to his girlfriend. 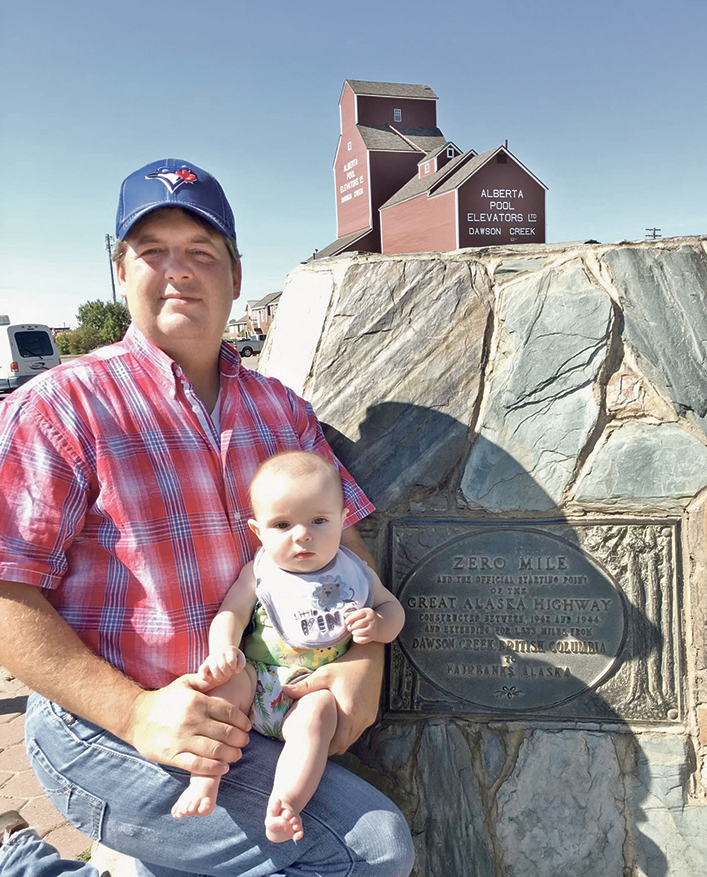 Darren Ippolito and his son Kord, at Mile Zero of the Alaska Highway in Dawson Creek, BC. Ippolito runs Moose Creek Red Angus, with his parents, in Kisbey, Sask | Ippollito family photo

Ippolito looked but couldn’t find an appropriate person to replace the employee who quit in May. So, he was down one employee for the entire summer and fall, in the middle of the 2021 drought that devastated pastures, cut hay yields in half and dried-up water sources for livestock across the Prairies.

In the fall, he posted another job ad for the ranch and received several responses. But finding a person who will stick on the farm, for more than a month, requires careful vetting.

He can usually find people who want to work on a ranch, because many have dreams of riding a horse on a windless, 22 C day and moving a herd of cattle onto a green pasture. To complete the romantic image, the horse ride and cattle drive would probably happen while the sun is setting.

That sort of thing does happen on a ranch but likely for only two days of the year. The rest of the time, the work doesn’t resemble a scene from a Hollywood movie.

“When you come to work at a farm, it’s not a traditional business,” Ippolito said. “It’s extremely intimidating. Your skill set has to be either exceptionally broad, or somebody who has a high competency of adapting. Those two things are really hard to find. They’ve been hard to find, forever.”

Moose Creek ranch is not alone. Thousands of business owners, in agriculture and nearly every sector of the economy, cannot find people right now.

In late November, Statistics Canada reported that there were 1,014,600 job vacancies in the country at the start of September and the job vacancy rate was six percent.

That’s not news for meat packers in Canada. Some meat processors have had job vacancy rates of 15 to 20 percent and higher in 2021. StatsCan, in its November report, said there are multiple reasons for an increase in vacancies.

“(It) can signal new or worsening structural labour market imbalances, such as shortages of specific skills or geographic mismatches between available positions and workers who could fill them.”

That line about ‘geographic mismatches’ sums up the situation for many Canadian farmers and ag businesses. Many Canadians don’t want to live or work in small-town Saskatchewan.

Still, there are people who might prefer to live in a small town and would like to work on a farm. But many farmers haven’t adjusted to the new realities and what employees now expect.

“In the old days, you told (people) what to do. Now you have to explain why they are doing it,” Ippolito said, adding farmers need to understand what motivates employees and how to create the conditions that make the work more satisfying.

Those include recognizing a worker’s contribution to the business and providing structured days off. Pay is a factor but it’s not the only factor.

The petroleum industry can attract people because it pays $50 per hour. But can it retain those workers?

“All they get is people who need money. They don’t get employees,” Ippolito said. “It has to be a career in agriculture. Not a job.”

He admitted he doesn’t know how to make farm work into a career but most of his employees had a positive experience at the ranch. He remains in contact with many of them, after they moved on to something else in their career path.

Lack of labour in a drought year like 2021, or in any year, requires Ippolito to improvise and scramble his way through every workday.

“It’s about existing. When you are labour short, you are just existing. Today we’re seeding and tomorrow we’re turning the bulls out and I better hope everything works on the seeder today,” he said. “Your plan is to survive the day and go to tomorrow. That’s not much of a business plan.”

In the past, the Ippolitos expanded their business by purchasing more land. It allowed them to graze more cattle and produce more feed for the larger herd.

That route to expansion has become more difficult.

“In the old days, land was easy. So that’s what we did. We found more land,” he said. “(Now) land is hard to get and labour is hard to get.”

If a rancher can’t buy land, intensive management is another option to increase production. Mob grazing, with a higher stock density on pasture and frequent moving of cattle, is one example. But that strategy requires more labour.

“If you want to grow your business, you have to do it with staff. You’re never going to get bigger unless you figure out how to have staff.”

Ippolito is confident the right person or persons will appear to fill the job vacancies on the ranch. Hopefully they’ll stick around.

However, he is concerned about the larger labour shortage in rural Saskatchewan.

For now, people in the 65-75 age group are the ‘glue’ holding many small towns together. They do many of the part time, full-time and volunteer jobs at the hockey arena, library, feed mill and grocery store, and drive trucks for grain farms in the region.

In five years, when that group gets too old, who will do the necessary work in community?

“What happens when the caretaker of the rink quits?” Ippolito asks. “That’s the problem we have here. He is 78.”